Quick Navigation
Some Terms That You Should Know
ISO
Aperture
Shutter Speed
Megapixels
Hot Shoe
RAW Files
What is the Sony A77II and How Does It Work?
What Makes It Unique?
Focus Advances
Body Design
Technical Specs
Body Type
Sensor
Image
Optics & Focus
Screen/ Viewfinder
Photography Features
Videography Features
Storage
Connectivity
Physical
Other Features
Pricing
How It Compares to Other Cameras
How It Compares to Other Cameras
Pros and Cons
Conclusion

It can seem like too much, but if you break it down into tiny chunks it won’t be so bad.

There’s nothing worse than not knowing what everyone is talking about right? Camera talk has a lot of specific terms that you should know about.

What is the Sony A77II and How Does It Work?

Alright, now that we know some of the key terms, let’s start talking about the Sony A7II. Sony is known for making good cameras and constantly innovating. This is no different with this camera. Which is an overhaul of the original A77 from 2011.

This new camera features a new autofocus sensor, and it’s a much more refreshed version of the existing design.

It’s actually it’s built around the AF (auto focus) model with the most focus points of any camera on the market.

The autofocus capability combines with the camera’s ability to shoot images at 12 frames per second to offer a compelling feature set.

What Makes It Unique?

Let’s break down some of the special highlights of this particular camera.

Here are some of the more technical aspects to this camera. You can use these to compare them to other cameras. If you don’t understand everything, that’s okay. We break down a lot of it within this review.

There are a couple places to find this camera. One is at Amazon. There are also Best Buy (body only).

So, this is a pricey camera, and that doesn’t even include the separate lens that you have to buy. So if you are interested in this camera, do not invest in this lightly. 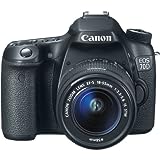 Now, there are always other cameras out there. Whether you aren’t a fan of the Alpha A7’s price or features, it’s always worth looking elsewhere. You can get a fuller idea of what you are looking from with your camera.

One of Sony’s competitors is Canon’s EOS 70D. This is a DSLR camera that has a number of great features. Some them include, a 20-megapixel CMOS sensor, innovative Dual-Pixel CMOS AF system, and a 3-inch vari-angle LCD touchscreen.

This is a nice lightweight camera, even with a battery and memory card in it, that’s comfortable to hold. It’s suited from everyone with normal sized hands to large hands. Adjustments are made with a combination of buttons and a single control wheel.

This is good for beginners but could be frustrating for more serious photographers.

It doesn’t help that some of the controls are placed awkwardly as well.

It’s built and designed well. It has a metal body with a plastic outer cover that’s waterproof.​

There’s also the Fujifilm X-T1. This is only the body, though. The lens isn’t included. It’s a compact camera that feels like a miniature DSLR. It’s been designed to appeal to a wide range of photographers. It’s designed that like a classic DSLR, it’s just smaller.​

This camera is a great camera for everyday use and action shots. It has the ease of a point and shoot while still being customizable like a DSLR. It’s a good camera to invest in if you are going from hobby to a small business.

It’s not to say that this camera isn’t for hobbyists, it’s just that it’s a lot of money to put into when you are just starting out.

We like that it’s weatherproof and has built in stabilization. We also appreciate Sony adding all these cool new editing features to make it easier to take the best photo possible.

We are disappointed that there aren’t headphone jack or memory card slots. It just seems to be a standard to have at this point. The controls, while for the most part easy to use, can be a little sensitive.