Finding the right camera is hard. The camera market is growing every day. There are more brands, cameras, and accessories.

If you have been into photography for a while, you may be more familiar with the brands and styles that you want. But, if you are brand new to this field, it’s easy to get overwhelmed.

Difference Between DSLR and Point and Shoot

Let’s start with the difference between two of the most common cameras: DSLR and point and shoot.

DSLR cameras offer more power, speed, and features than the point and shoot. They also let you manually control certain aspects of a shot. This is why these tend to be more popular with professionals versus beginners.

These also cost more and are larger than point and shoots.

Point and shoot cameras are also known as compact cameras or a fixed lens camera. This is because these cameras can’t change lenses like DSLRs can. The lens is built right into the body of the camera.

It’s also the easier to use this camera. It’s more automatic than DSLRs. You quite literally point and shoot the camera to get the image, hence the name.

The big difference between the two is that a DSLR can change its lenses. This means that you can change its capabilities and features and you change them. Point and shoots are more static.

Another difference between the two types is how the photographer sees as he frames the shot. With a DSLR, you can usually see the image directly through the lens. This is because of a series of prisms and mirrors that reflect the lens image back to the viewfinder.

With a point and shoot, there usually isn’t a viewfinder. They depend on the LCD screen to let you frame the photo.

What Makes the Sony Alpha A7 Different?

The Sony Alpha A7 is a DSLR camera. Sony is a familiar brand in the camera market, and they are known for their experimentations. This camera is no exception. Sony has managed to make to create a full frame camera that’s about the same size as Olympus OM-D R-M1.

If you aren’t familiar with that camera, it means that the Sony camera is much smaller than their full frame, interchangeable lens peers.

It’s solidly built, though some of the controls are oddly placed. The A7 features a full frame 24-megapixel CMOS. It also uses the Hybrid AF system with an on-chip phase detection. It’s also able to use electronic first curtain mode, which allows for a quieter shutter, and reduces the potential for “shutter shock” vibration.

This will come especially in handy if you are a wild life photographer. The shutter could possibly scare away any animals that you are trying to photograph.

It also uses Sony’s latest Bionz X processor and has XGA electronic viewfinders., tilting LCDs, WiFi, and a weatherproof body. A big downside, though, is that it doesn’t have image stabilization. This helps with shaking and prevents photos from blurring. If you have shaky hands, you may have a hard time with this camera.

This is the company’s latest processor, and it’s more powerful than the previous generation. Sony is a little vague on the specifics but is touting the new processor as offering “Detail Reproduction Technology.” This seems subtler and sophisticated sharpening system. Sony promises less apparent emphasis on edges, giving a more convincing representation of detail.

Another thing the processor can do is “Diffraction Reduction.” This means the camera’s processing attempts to correct for the softness caused by diffraction as you stop a lens’ aperture down.

This is probably aperture-dependent and sounds similar to an element of Fujifilm’s Lens Modulation Optimization system.

We are providing a list of the more technical specs of this camera. This is helpful so you can compare and contrast with other cameras. If this seems like a totally different language, that’s okay. We break down most of these specifications in this review. 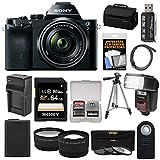 You can get this camera in a couple of places. The first being Amazon. The second place is at Best Buy.

So yeah, it a great value deal. This is particularly good if you are a beginner to photography and don’t have the accessories already. 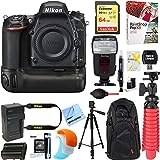 Now if it seems like the Alpha A7 isn’t the right camera for you, no worries. There are other cameras out there in the world. One particular camera seems to be going head to head with the Alpha A7. It’s Nikon D750, which is on Amazon and also comes in a bundle.

It’s easy to use, there aren’t too many buttons and you can use fast continuous shooting. ​ The build quality and design are great. It’s nice, lightweight, and sleek.​

Another competitor is the Canon EOS 6D. You can get it on Amazon. It’s solidly built but not as heavy duty as other models. It’s has a plastic top plate which is to allow WiFi and GPS to work. It also only offers one memory card slot while a lot of other cameras offer you two.

It has a familiar feeling to how you use it, especially if you have used any mid-range EOS camera recently. It’s seamless to create a full frame photo. Plus, it has a touchscreen which always makes things easier to use.

This camera is great but pricey. We like that it’s lightweight and the quality of photos. It has a lot of cool features including ones that can help with photo editing. This will bring an extra spark to your photos.

The fact that you can quiet the shutter is a great highlight. This can open a lot of doors for wildlife photographers. The animals won’t run away before you can get the shot.

Some downsides are that it has a limited battery life and that it has an awkward menu. This could make it hard to operate.

The price is also something that is hard to ignore. Even with the bundle, it’s a lot of money. This isn’t a great idea for someone who is super new to photography. If someone was maybe a mid-tier photographer, this could be the best deal ever.

The issues with JPEG rendering can turn off a lot of people, especially if you plan on making a lot of JPEGs.